The rate is an all-inclusive rate. Once the guest arrives at Patagonia River Ranch there are NO EXTRA CHARGES.”
Read customer testimonials... In the estancias of Patagonia, a seasoned angler finds much more than just trophy trout. Come along on the fly-fishing trip of a lifetime, complete with fine wine, oustanding barbecue, majestic countryside, and plenty of requisite siestas. Pura vida, indeed. The unbeatable rivers of Northern Patagonia. Argentina’s Patagonia River Ranch has the grit of the wilderness, the comforts of a luxurious estancia and some of the best trout fishing in the world.

In 1993, on her first trip to the northern Patagonia region of Argentina, Edie Gangwer ate a few berries from a yellow-flowered calafate bush. A fishing guide had given them to her…”
Download Article… At Patagonia River Ranch, it’s the magnitude of the potential that drives this stuff. You may not catch-and-release the biggest trout of your life, but it surely lives here, and you will have one of the world’s best shots at making it happen.”

It was mid-March and we were floating Argentina’s Collon Cura River in northern Patagonia southwest of Buenos Aires. As it winds through the rolling hills near the Andes, this large freestone river resembles the Snake passing through Jackson Hole…” 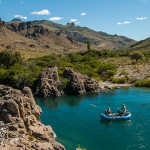